Draft of the 14th Amendment to the United States Constitution, outlining the rights and privileges of American citizenship, ratified in 1868. Photo by Hulton Archive/Getty Images
Books

Our October pick for the PBS NewsHour-New York Times book club, "Now Read This" is Adam Winkler's "We the Corporations." Become a member of the book club by joining our Facebook group, or by signing up to our newsletter. Learn more about the book club here. 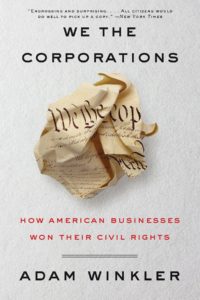 Long before the controversial 2010 Supreme Court ruling Citizens United, which allowed corporations to spend money to influence elections, the court had already granted corporations many of the same rights as people.

One early and particularly surprising case was the Southern Pacific Railroad's successful move to win equal protection and due process rights under the 14th Amendment — an amendment that was aimed at protecting former slaves.

Meanwhile, African Americans would not see real protections from that amendment for decades to come.

In "We the Corporations," this month's book club pick, UCLA law professor Adam Winkler explores the long fight for corporate rights. Below, Winkler annotates a page of the book that details just how the Southern Pacific Railroad leveraged a progressive reform to meet their own ends.

From "We the Corporations"

The Fourteenth Amendment to the Constitution, adopted after the Civil War, is one of the brightest stars in the constellation of liberty. As everyone knew when it was ratified in 1868, the amendment's guarantees of equal protection and due process were designed to secure the rights of the newly freed slaves and protect them from discrimination by the states. Nearly a decade and a half later, however, in December of 1882, the esteemed Roscoe Conkling told the justices the Fourteenth Amendment was also written to protect the rights of corporations like his client, the Southern Pacific Railroad Company.

Although no lawyer could approach Webster's soaring rhetoric, Conkling was also known as a master orator and had the respect of the justices, as well as their ear. "No man ever came into our court who was listened to with more undivided attention than Roscoe Conkling," said Chief Justice Morrison Waite, who presided over the Southern Pacific's case. Justice Samuel Miller, whose previous opinions seemed to foreclose Conkling's argument that the Fourteenth Amendment applied with equal force to corporations, nonetheless agreed that "for the discussion of the law and the facts of the case Mr. Conkling is the best lawyer who comes into our court."

Conkling was the leader of the Republicans in Congress for nearly two decades immediately after the Civil War, when Republicans dominated Washington. A member of the House and then the Senate, Conkling was often rumored to be a presidential candidate. Although he never became his party's presidential nominee, he was twice nominated to the Supreme Court. The second time was just months before he made his argument on behalf of the Southern Pacific. Even though the Senate voted to confirm him, Conkling declined, pleading poverty. Like Webster, Conkling, who spent his career in public service, needed the money–especially the kind a lawyer could make representing the Southern Pacific, one of the largest, most politically powerful corporations of the late nineteenth century.