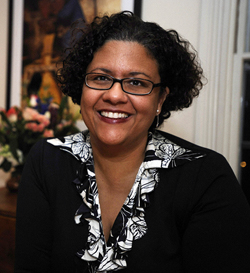 Yale University professor Elizabeth Alexander at her home in Cambridge, Massachusetts Wednesday 17 December 2008. Alexander has been asked to read a poem during the inauguration ceremonies for President Elect Barack Obama.
Photo/CJ Gunther © 2008

It has been widely noted that President-elect Barack Obama is a reader of poetry. Only days after winning the election, Mr. Obama was spotted with a copy of Derek Walcott’s collected poems. (Walcott recently penned his own poem about Mr. Obama). The president-elect even tried his hand at writing poetry, publishing two pieces in a 1981 literary journal.

Therefore it came as no surprise last week when it was announced a poet would read at the inauguration ceremony for the first time since 1997. As millions of people watch around the world, poet Elizabeth Alexander will present an original work.

“I have to take a deep breath and do what I do,” Alexander said in a recent phone interview. “[Mr. Obama] is asking us to bring what we have to the table, to contribute what we have, so it is not like I have to figure out how to be a poet from scratch suddenly.”

Alexander will be just the fourth poet to read at a swearing-in ceremony for the nation’s highest office: Robert Frost recited “The Gift Outright” at John F. Kennedy’s in 1961; Maya Angelou read “On the Pulse of Morning” at Bill Clinton’s in 1993; and Miller Williams’ “Of History and Hope” was also read for Clinton in 1997. (James Dickey almost made it, reading his poem, “The Strength of Fields,” at Jimmy Carter’s inauguration eve gala at the Kennedy Center in 1977.) Alexander is the author of four volumes of poetry, including “American Sublime,” which was a finalist for the 2005 Pulitzer Prize.

A professor and incoming chair of African-American studies at Yale University, Alexander is keenly aware of the writers that have come before her. “I have edited Gwendolyn Brooks’s poems. In my scholarship, I have tried to create that lineage to black poets and black women poets and how society has changed,” she said.

Born in Harlem and raised in Washington, D.C., Alexander was just a year old when her parents took her to see Martin Luther King Jr. delivered his “I Have a Dream” speech at the Lincoln Memorial. On Jan. 20, she will gaze across the National Mall to those historic steps and have her own moment to address the nation.

Asked how she is crafting her poem, Alexander said, “I am trying to both be quiet inside and keep my ears open outside to listen to where we are right now.”

Alexander met and later became friends with the Obamas in the 1990s while she was teaching at the University of Chicago. Her brother, Mark, works on President-elect Obama’s transition team and was a senior adviser to the campaign.

In his most recent appearance on NBC‘s Meet the Press, Mr. Obama said he wants to open up the White House to showcase a variety of artists and performers, including poets. Upon hearing that pledge, Alexander said it shows the incoming president has “a clear respect for our art.”

Next week, Jeffrey Brown’s discussion with Alexander is scheduled to air on the NewsHour. On Monday, you can watch her read her work here on Art Beat.

Editor’s note: You can find more information about Alexander and listen to her discuss past inauguration poets at the Poetry Foundation.