Buck O’Neil never uttered a single word of bitterness or regret about not being elected to the baseball Hall of Fame. Till the end, he urged those who loved and rooted for him to do the same.

Now, long after a near miss that left many wondering if he’d ever make it, they can rejoice.

O’Neil, a champion of Black ballplayers during a monumental, eight-decade career on and off the field, joined Minnie Miñoso, Gil Hodges and three others in getting chosen for the Hall of Fame on Sunday.

Former Minnesota Twins teammates Tony Oliva and Jim Kaat also were elected along with Bud Fowler by a pair of veterans committees.

“While we’re all sad that Buck is not here, you just cannot not be happy for all of those who continued to beat that Buck O’Neil drum,” he said.

Oliva and Kaat, both 83 years old, are the only living new members. Longtime slugger Dick Allen, who died last December, fell one vote shy of election.

The six newcomers will be enshrined in Cooperstown, New York, on July 24, 2022, along with any new members elected by the Baseball Writers’ Association of America. First-time candidates David Ortiz and Alex Rodriguez join Barry Bonds, Roger Clemens and Curt Schilling on the ballot, with voting results on Jan. 25.

Passed over in previous Hall elections, the new members reflect a diversity of accomplishments. 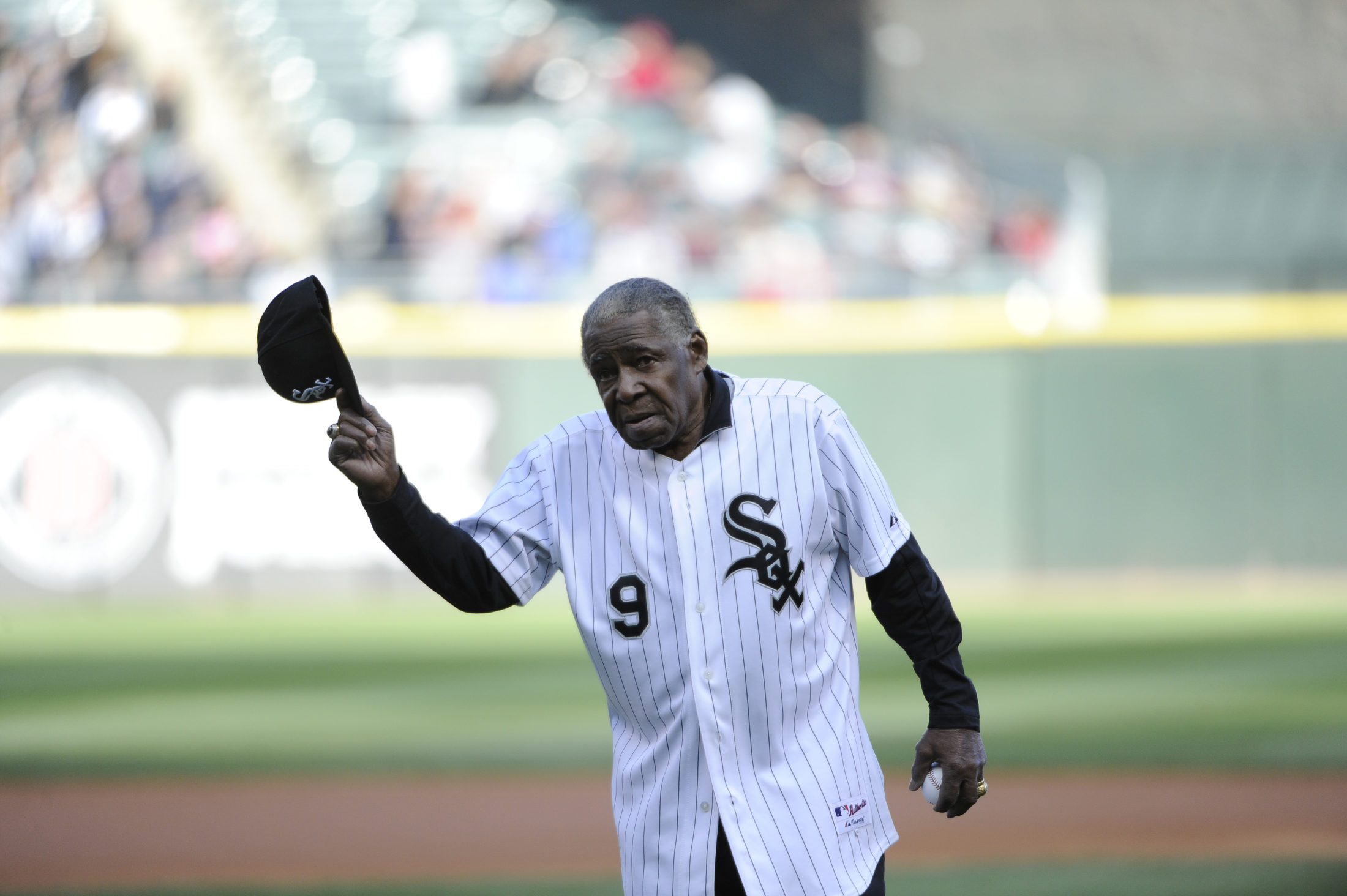 Former Chicago White Sox player Minnie Miñoso throws out the first pitch before the game between the Chicago White Sox and the Tampa Bay Rays in April 2014 at U.S. Cellular Field in Chicago. Photo by David Banks/Getty Images

This was the first time O’Neil, Miñoso and Fowler had a chance to make the Hall under new rules honoring Negro League contributions. The Major League Baseball color barrier wasn’t broken until 1947 by Jackie Robinson.

Last December, the statistics of some 3,400 players were added to MLB’s record books when the sport said it was “correcting a longtime oversight in the game’s history” and reclassifying the Negro Leagues as a major league.

O’Neil was a two-time All-Star first baseman in the Negro Leagues and the first Black coach in the National or American leagues. He became the ultimate ambassador for the sport until his death in 2006 at 94, was posthumously awarded the Presidential Medal of Freedom and already is honored with a life-sized statue inside the Hall of Fame.

For all O’Neil did for the game, many casual fans weren’t entirely familiar with him until they watched the nine-part Ken Burns documentary “Baseball,” which first aired on PBS in 1994.

There, O’Neil’s grace, wit and vivid storytelling brought back to life the times of Negro Leagues stars Satchel Paige, Josh Gibson and Cool Papa Bell, plus the days of many more Black players whose names were long forgotten.

Kendrick said it was too bad O’Neil won’t be in Cooperstown for the induction ceremonies, “but you know his spirit is going to fill the valley.”

O’Neil played 10 years in the Negro Leagues and helped the Kansas City Monarchs win championships as a player and manager. His numbers were hardly gaudy — a .258 career batting average, nine home runs.

But what John Jordan O’Neil Jr. meant to baseball can never be measured by numbers alone.

O’Neil was a coach with the Chicago Cubs and enjoyed a prolific career as a scout.

His impact is visible to this day.

Along with his statue in Cooperstown, the Hall’s board of directors periodically present the Buck O’Neil Lifetime Achievement Award to a person whose “whose extraordinary efforts enhanced baseball’s positive impact on society … and whose character, integrity and dignity” mirror those shown by O’Neil.

In 2006, it appeared O’Neil would get to soak in deserved praise for his achievements and advocacy when the Special Committee on Negro Leagues convened to study candidates for the Hall of Fame. The panel indeed elected 17 new members but O’Neil was not among them, narrowly missing out.

O’Neil was chosen to speak on behalf of those newcomers, all deceased, on induction day. True to his nature, he didn’t emit a single word of remorse or self-pity about his own fate of being left out.

“I’m near tears,” Burns tweeted. “Buck O’Neil is one of the greatest people I have met on this planet. I’m just so happy and pleased and know that somewhere Buck is already in an even bigger Hall of Fame.”

The PBS NewsHour’s Jeffrey Brown looks at a new exhibit on the long history of Latinos playing baseball and how they changed the sport fundamentally in the U.S. Video by PBS NewsHour

Miñoso was a two-time All-Star in the Negro Leagues before becoming the first Black player for the Chicago White Sox in 1951. Born in Havana, “The Cuban Comet” was a seven-time All-Star while with the White Sox and Indians.

“Trailblazer among Afro-Latinos and Cubans, five-tool dynamo on the baseball diamond, ‘Mr. White Sox’ … any description of his career now ends with the words ‘Hall of Famer,'” Chicago chairman Jerry Reinsdorf said in a statement.

There was nothing mini about Saturnino Orestes Armas Miñoso on the field. He hit over .300 eight times with Cleveland and Chicago, led the AL in stolen bases three times, reached double digits in home runs most every season and won three Gold Gloves in left field.

The White Sox retired his No. 9 in 1983 and he remained close to the organization and its players before his death in 2015.

An eight-time All-Star with 370 home runs and a three-time Gold Glover at first base, Hodges enhanced his legacy when he managed the 1969 “Miracle Mets” to the World Series championship, a startling five-game win over heavily favored Baltimore.

Hodges was still the Mets’ manager when he suffered a heart attack during spring training in 1972 and died at 47.

His daughter, Irene, said she was with her 95-year-old mother when the vote was announced.

“She just pounded her heart and said I’m so happy for Gil. My dad was a great manager and a great player but above all else he was a great dad,” she said in a statement released by the Mets.

Oliva was a three-time AL batting champion with the Twins whose career was cut short by knee problems.

“I was looking for that phone call a long time,” Oliva said on MLB Network. “I had so many people work so hard for me to be elected. They said I should have been elected 40 years ago. To be alive to tell the people means a lot me.”

“I never thought I was the No. 1 pitcher,” he said. “I wasn’t dominant. I was durable and dependable. I am grateful they chose to reward dependability.”

The 16-member panels met separately in Orlando, Florida. The election announcement was originally scheduled to coincide with the big league winter meetings, which were nixed because of the MLB lockout.

Oliva was an eight-time All-Star and batted .304 in 15 seasons, all with the Twins. The Cuban-born outfielder known for hitting wicked line drives was the 1964 AL Rookie of the Year.

Kaat was a three-time All-Star, a three-time 20-game winner and pitched in four decades. He boosted the Twins into the 1965 World Series and won a ring as a reliever on the 1982 Cardinals.

Kaat became a longtime broadcaster after he finished playing. During this year’s playoffs, he apologized after saying on an MLB Network game telecast that teams should try to “get a 40-acre field full of” players who look like White Sox infielder Yoán Moncada, who is Cuban.

The remark prompted some viewers to recall the unfilled promise by the U.S. government that freed slaves would get 40 acres and a mule after the Civil War.